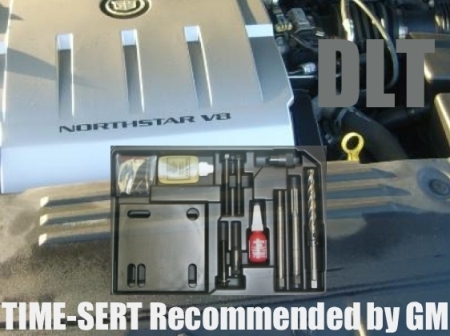 Northstar engines used primarily in Cadillac's have a common issue with failed threads for head bolts. Aluminum used for blocks in these engines sometimes fail causing head gasket failure. GM advises tech's when removing the head bolts for ANY reason, the threads on the bolts should be examined for the presence of aluminum shavings. This indicates weakening aluminum threads that are more prone to fail. Although we sell the Helicoil brand as a less expensive alternative; GM recommends the use of "Time-Sert" as their preferred repair. Also see Time Sert compared to Northstar Performance stud type kits.

GM has the following to say, regarding head bolt thread repairs
When disassembling the engine, all head bolt threads should be inspected as they are removed. If there is
any section of the aluminum block thread on the bolt, that hole will need a Time Sert repair. Typically, all the cylinder head bolt holes do not need Time Serts. The recommendation is to do a thread repair on the damaged hole(s) and the adjacent holes. As the clamp load is relieved from one hole (threads pulling), the adjacent holes threads load will increase and may be damaged during reassembly. There have been some comments about Time Serts pulling out of the block in a short time after a repair was done. The manufacture of the insert also makes a larger size insert. This larger size insert cannot be used for warranty repairs. Due to the increased 0.D. of this sert, it's possible that when installing this larger sert that it will break out in the water jacket causing a coolant leak. The most likely reason that a Time Sert pulls out after
installation is that the incorrect J tools were used for the model year application. If the incorrect tool is used,
installation of the sert could be either too deep in the hole or not deep enough. 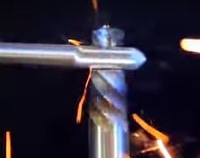 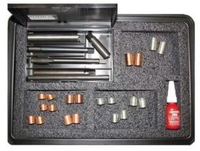